Three Years After Hurricane Michael, ESG is Back and Charging Ahead

Few shipyards have the opportunity to build their infrastructure around the needs of a specific vessel program, but Florida-based Eastern Shipbuilding Group is doing exactly that.

On October 10, 2018 - three years ago this Sunday - ESG took a direct hit from Hurricane Michael, the third-most-powerful Atlantic hurricane ever to make landfall in the United States. It wiped most of Eastern's primary Nelson Street shipyard in Panama City off the map. Today, just three years after the storm devastated the area, ESG has fully rebuilt its facilities from scratch. Turning adversity into opportunity, it has used this clean-slate starting point to optimize its yard layout for one very specific program. Its Nelson Street Shipyard is now designed for (and dedicated to) the U.S. Coast Guard's highest acquisition priority - the Offshore Patrol Cutter program.

The yard's success with the OPC is the story of an impressive rebound. Eastern Shipbuilding won the Coast Guard's first Offshore Patrol Cutter contract in 2016, beating out defense industry heavyweights Bollinger and Bath Iron Works. After two years of design review and preparation, it received final approval to move ahead with construction at the end of September 2018. Less than two weeks later, Hurricane Michael made landfall in Panama City as a Category 5 storm, packing winds of up to 160 miles an hour. Most buildings at the Nelson Street yard were significantly damaged or destroyed, and one nearly-complete commercial project - the fishing vessel North Star - partially capsized.

The North Star was badly damaged in Hurricane Michael just as she was nearing completion (left), and she has since been successfully repaired and delivered (right)

The storm also exacted a powerful toll on the surrounding community. About 69 percent of all homes in the Panama City area sustained some amount of damage from wind or storm surge, including the homes of many of ESG's employees. The company decided to provide direct assistance by creating temporary shelter on its own property.

"We were faced with a decision. When you are hit so hard, you know, do you lay down or do you jump right back up and fight your way back? Our company, our people, our community, chose to get right up immediately. We went back to repairing our facilities, getting our folks back to work, helping our friends, neighbors, and employees," says Joey D'Isernia, President of Eastern Shipbuilding.

ESG reached out to its partners, and it raised more than a quarter of a million dollars for the employees who were most affected by storm damage. For those who had been left completely homeless, the firm set up a temporary housing community on site, giving 100 workers the chance to re-establish their lives and keep earning a steady paycheck. It was a team effort, D'Isernia says, with generous backing from longtime business partners. 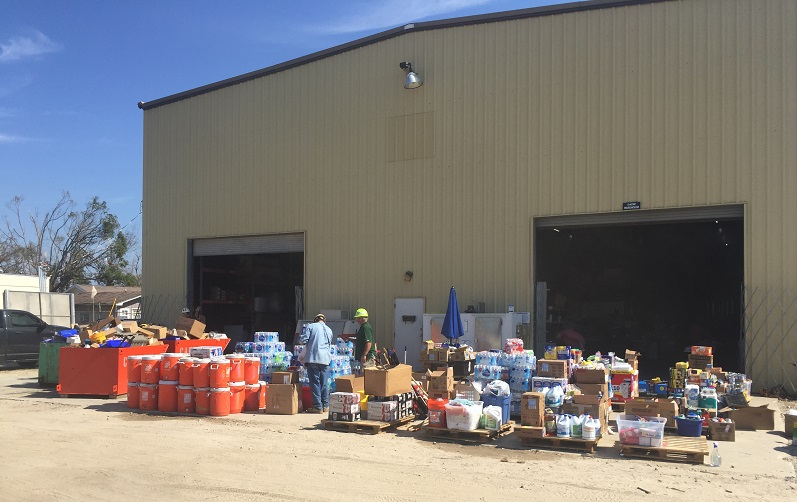 Business partners, vendors and other supporters provided relief supplies for workers who were affected by the storm (ESG)

"We've treated our customers and our vendors with the utmost respect, and in return, they really came to our aid after the storm," says D'Isernia. "With their support, we turned our warehouse into a temporary Costco filled with relief supplies. We had anything and everything you can imagine, and our employees and their families were able to come through and shop at no charge."

Within one week, relying on temporary power sources, Eastern reopened its Allanton Shipyard and set up temporary spaces to continue OPC production engineering. This allowed Eastern to start cutting steel in January 2019, right on time for the original schedule for the first OPC. Within weeks, ESG had 80 percent of its employees back at work. By taking care of its workforce, Eastern kept production moving and laid the groundwork for a successful rebound.

"Today, we're charging ahead with full steam and a new sense of vigor," says D'Isernia. "It's the third year after hurricane Michael and we're well into the first vessel - it's fully assembled."

ESG is competing for the next phase of the OPC contract, which covers the next 11 vessels in the series. It is a massive, multi-billion-dollar deal, and Eastern is pulling out all the stops. It has built a dedicated C5ISR integration facility on site, allowing all of the OPC's sophisticated electronics to be tested together before installation. The firm has also invested in a high-end aluminum fabrication facility at the Nelson Street yard, which is now nearing completion.

ESG has also fully reconstructed its second yard in nearby Allanton, which handles the company's commercial shipbuilding portfolio. The firm also added a brand new facility in the town of Port St. Joe, located some 30 miles to the southwest. This new site has a long wharf and plenty of room to work on final outfitting or topside repair work. The yard's new Ollis-class ferries for New York's Staten Island Ferry system are getting their finishing touches at the Port St. Joe yard, and the first in the three-vessel series was just delivered in August.

Luckily, Eastern did not have to draw on federal relief funds to rebuild its facilities. The reconstruction was supported by insurance proceeds, and the infrastructure expansion work was underwritten with $50 million in state appropriations and economic development grants.

The number-one objective for Eastern's investment program is to meet the Coast Guard's production requirement of two OPC hulls per year, with the capacity to go up to three per year if desired.

"Everything we've done, both before and after the storm, has been to position ourselves to provide shipbuilding excellence to the Coast Guard and earn those follow-on vessels. We want to be the 'OPC factory,'" D'Isernia says.

The OPC contract is an opportunity for the yard, but it also has significant importance for the rest of the community. ESG is the largest private employer in the county, and it pays a solid wage without requiring a college diploma. Many of its employees have been with the firm for their entire career, starting right out of high school. That possibility is still available to the next generation: ESG is actively adding to its 1,300-strong workforce today, and it sponsors two vocational programs to give new candidates the skills they need.

"At the end of the day, I think it boils down to really treating people fairly," says D'Isernia. "And the rest takes tends to take care of itself."

The opinions expressed herein are the author's and not necessarily those of The Maritime Executive.